Artist Reception and Painting Viewing for Gretchen Lopez and Debra Williamson from 6:00 pm - 7:00 pm both evenings.

The Moving Order Band will play entirely original live music throughout the duration of the show to accompany the movement arts you will see 'unfurling' and unfolding on and high above the stage.

The show title of Unfurl was inspired by the modern dance duet of the same name originated by professional dancer Christine Eaton of Nikolais Dance Theatre featuring her daughter Taylor Marie (2012). The name evokes a sense of plant life unfurling its petals and leaves, reaching toward the sun, nourished by and rooted in the earth. To unfurl is to awaken, unravel, and to begin with hope renewed in Spring. Taylor and her father William Eaton later created an adaptation of the piece (March 2022) as an aerial dance and live music duet with silks and harp guitar. Unfurl (2023) is dedicated to Taylor's parents, William and Christine Eaton, multi-talented artists and co-founders / co-directors of Old Town Center for the Arts. 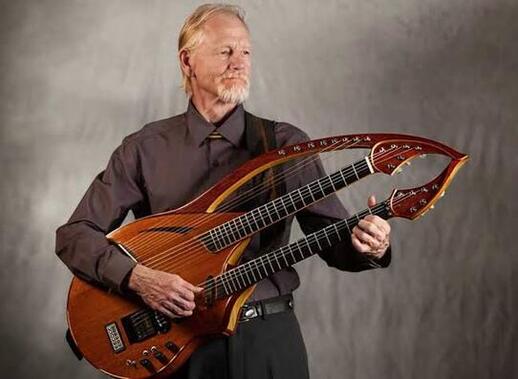 William Eaton has been building one-of-a-kind guitars and multi-stringed instruments since 1971. His innovative instruments have been featured in Guitar Player, Frets, Acoustic Guitar, Experimental Musical Instruments, and many other publications. Eaton’s instruments have been displayed, at the Hollywood Bowl Museum, Museum of Making Music (Carlsbad, CA), Musical Instrument Museum (MIM – Phoenix, AZ), Tohono Chul Park (Tucson, AZ), Winter NAMM Exhibit (Anaheim, CA) among others.
A four-time Grammy Nominee, Eaton has composed for and performed with the Amadeaus Trio, Nouveau West Chamber Orchestra and the Nebraska Chamber Orchestra, and has performed as a soloist, with the Electric Harp Guitar Group, Ananeah, and the Nakai, Eaton, Clipman Trio. Eaton’s unique and original sound has been captured on 16 recordings for the Canyon Records label including his long time collaborations with R. Carlos Nakai and four recordings as the leader of the William Eaton Ensemble: an eclectic “world chamber fusion” group whose releases, have earned Billboard Critic’s Choice awards as well as charting in the top ten World album category. 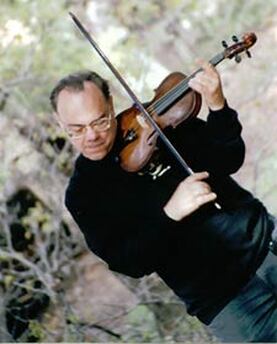 Allen Ames grew up in Phoenix, began playing the violin at age nine, and has studied with Wayne Clark, Max Mandel, William Majors, Frank Spinoza, Theodora McMillan and James Buswell.  He studied composition with Janne Irvine and James DeMars, and has been featured in the N.E.A’s Composers in Concert series co-sponsored by the Arizona Composers Forum.   He is a member of ASCAP.

He was apprenticed to the late Carl E. Reiter in 1980 as a violin maker and is listed in Wenburg’s Violinmakers of the United States.  In 1995 he developed the Violira: a six-string, five octave instrument spanning the ranges of the violin, viola, and cello.

Allen has played with orchestras and chamber ensembles including the Arizona Opera and Ballet Orchestras, Nouveau West and La Forza Chamber Orchestras, the Phoenix, Amabile and Philharmonic String Quartets, the TOS Performing Arts Ensemble, and many others. He has also played baroque violin with the Camerata Sonora, Solis Camerata, and the Phoenix Bach Choir.

Allen has played jazz since high school days, adding guitar, bass, and drums to his stable of instruments, and has performed with many iconic Phoenix jazz artists over the years.  More recently he has been specializing in Gypsy swing.

Allen has taught many music appreciation courses and given pre-concert lectures for the Phoenix Symphony and the Sedona Chamber Music Festival.  As a published poet, he has given many performances combining music and poetry.

Claudia Tulip, a Music Together® Center Director since 1999, currently directs Under One Common Sky  featuring the Music Together, KidStrums, Indigo Rhythm programs, small ensemble coaching and private lessons in flute, guitar, improvisation, ear training and songwriting. Classically and jazz trained, she has written music for dance companies, documentaries and theatre. Claudia was a contributing musician to Jerry Jacka's Emmy award winning documentary "Beyond Tradition" and the NAMA award winning CD 'Colors of My Heart' by Sharon Burch. Claudia's artistic life has always been a blend of performance and innovative teaching. She had the great fortune of participating in Master Classes with Marcel Moyse, considered to be one of the greatest flute masters of the 20th century.

In addition to her B.A in music performance and study of the Dalcroze and Orff methods, Claudia attended jazz band directors' summer intensives at Eastman School of Music and Toronto's York University along with years of jazz study with "Coach" Barry Harris at the Jazz Cultural Theater in New York City. Since 1988, Claudia has been the flutist of the William Eaton Ensemble, a world fusion quintet, having released five albums for Canyon Records. 'Where Rivers Meet' earned a Billboard Critic's Choice and 'Sparks and Embers' garnered top ten play list in the World Music catagory in Japan and Canada in 2006.

During Claudia's time of tenure at New York's famed Saint Ann's School, she conducted the Middle School Chorus, Chamber Ensemble, Flute Ensemble and Jazz Ensemble while teaching Orff-inspired classes in Improvisation-Composition. She was one of 10 Music Faculty members at Saint Ann's. During the 2014 - 2015 school year, she taught innovative music expression to Grades 4-8 at Desert Star Community School. The Indigo Rhythm and KidStrums programs grew out of Tulip's desire to share the organic nature of exploring an instrument and using it as a creative vehicle for improvisation, composition, ensemble work and presence. Classes, lessons and workshops embrace the understanding that the muse within each of us need only be recognized and cultivated to express works of great beauty in resonant concert with others, Under One Common Sky*. Tulip is known for diving deep into the heart of music and creativity with people of all ages and many cultures.